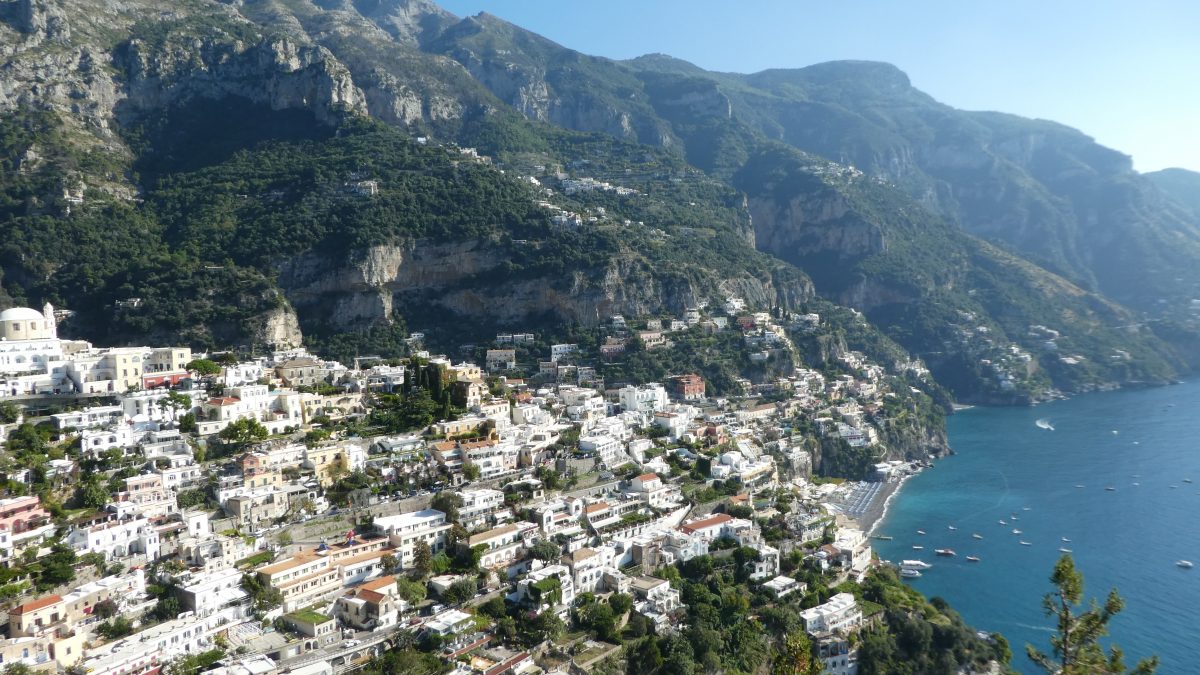 The Amalfi Coast is a spectacular 40km stretch of road strung along a peninsula.  The road is carved in cliff side, and the views are spectacular.  Part of the fun is watching the drivers deal with the hundreds of switchbacks on what is effectively 1 and 3/4 American lanes.  RV’s are forbidden which allowed me to enjoy the views and the chaos on the road as a spectator.  It was worth every dollar we paid to not be driving.

To give an example of Italian driving from today.  Our driver did not speak English.  At one point we were crossing a bridge and I saw a little village and harbor tucked under the bridge and pointed to get Ton’s attention.  Next thing I know the driver pulled over into the on coming lane (there were cars coming), threw the van in reverse, and backed to the middle of the bridge where he parked, turned around and looked at the 5 of us in the back seat and said “Picture”?  The five of us looked at each other and said why not? So we got out of the car while cars going in both directions dodged around us and the van.  The funny thing is this did not seem to faze any of the Italians in the other cars, vans and busses in the least, they all just shrugged and maneuvered around us like it was perfectly reasonable to stop in the wrong lane of a narrow two lane bridge to snap a few pictures.

Our tour included  three towns and a tourist attraction.  The first town we saw was Positano which is the jewel of the Amalfi.  Steinbeck wrote a short story about it, and it has been featured in several movies.  It is a beautiful sea front with the town flowing up the cliffs.  Tourism is the main, (possibly only) industry in the town now, but the setting makes it worth dealing with all of the people.

The next stop was at a tourist attraction called The Grotto.  There were six of us on the tour, two other Americans, and a French couple.  None of us were quite sure what we were getting into, but it turned out to be a short tour of a pretty underwater cave.

We next stopped at the largest city and the namesake of the Amalfi Coast, Amalfi.  In many ways it felt a lot like Positano.  A small harbor leading to another town carved from cliffs.  Amalfi did have a really beautiful cathedral though we decided to pass on the interior as we are getting a little jaded about cathedrals.

The final town for the day was Ravello which was up in the mountains of the Amalfi away from the sea. It was clearly the most prosperous of the towns, and looked like it dealt with a higher end clientele than the other two towns.

We enjoyed poking around in a ceramic store with the French couple.  At the beginning of the day they were pretty quiet as neither one speaks English.  But by the end of the day we had a fun time communicating with them using broken English, broken French, broken Italian, sign language and smiles and laughter.  They have been traveling extensively and it is a shame we cannot communicate better as Ton and I would love to talk to them about their travels in Morocco and Greece.

This site uses Akismet to reduce spam. Learn how your comment data is processed.